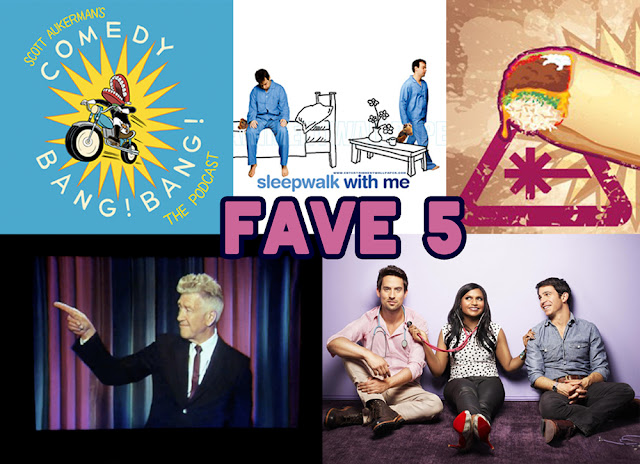 Something you may not know about me: I love comedy. I spent a whole summer when I was thirteen watching old Saturday Night Live reruns and Late Night With Conan O'Brien. That is literally all I did. My brother and I practically memorized all of Mitch Hedberg's Strategic Grill Locations and Mitch All Together and one of my best memories is watching Monty Python and The Holy Grail with my dad.

So this week, I'm sharing some of my favorite comedy stuff.

1. Comedy Bang! Bang! is my favorite podcast. The basic premise is an interview hosted by Scott Aukerman that gets interrupted by a "surprise guest." It is ridiculous and amazing. Just listen to this clip of James Adomian as Huell Howser. It is pure gold. When I need to catch up on my podcasts, this is the first one I go to. And there's the television show on IFC that premiered this past June that is just as ridiculous.

2. Mike Birbiglia is one of my favorite comedians. I just finished reading his book Sleepwalk With Me which he has turned into a film. I'm really excited to watch it. He's a great storyteller and I've listened to him on This American Life so I have no doubt that I will love this movie.

3. I've listened to the Nerdist podcast from day one and it's been really cool to watch Chris Hardwick kind of build his little nerd empire. I got to see him and Jonah Ray at The Benson Interruption last year and Jonah again when he and Kumail Nanjiani (another amazing comedian) brought The Meltdown to San Diego Comic Con. I personally love the hostful episodes. In addition to being funny, they are surprisingly motivational. I always try to enjoy my burrito.

4. I loved seeing David Lynch pop up on Louie. He was perfect. I'm actually surprised the internet didn't implode when that happened. If you don't watch Louie then I don't know what you're doing with your life. I started to write this post while watching the latest episode and had to stop in the middle because of how emotionally involved I was. You start out laughing, then you cry, then you throw your hands up in the air and cry and laugh some more and celebrate life. That's not an exaggeration, that's exactly what I did tonight. Louis C.K. puts so much truth in his show and portrays humanity perfectly. That's not an exaggeration either.

5. Who doesn't love Mindy Kaling? She's just so darn lovable. I was super excited when I heard about The Mindy Project and I liked the pilot. Obviously, pilots aren't great indicators of the quality of a show because they need more than 30 minutes to figure everything out (I mean, it took Parks and Recreation a whole season) but I'm excited to see more. It took me like five episodes before I was totally sold on New Girl and this pilot is way better than theirs. But I'm biased because of my love for Kelly Kapoor.